We! – Bin Qasim City Gwadar a project of “NEW AGE Developers Pvt Ltd” Chartered Town Planners & Developers have been backed by the Creditability and Construction excellence in the Real Estate sector of Pakistan. The group is carrying forward the legacy that comprises unique living Concepts, intensive projects location, highest professional standards, Exclusive quality, and timely delivery, we process experience in designing and building successful residential and commercial projects. Our success has been based upon innovative architectural and planning Philosophy, High standards of construction, management, and a Professional team geared to service delivery. Each of our projects at New Age Developer is executed after complete market research in which we establish customer’s preferences and tastes.

We try to accommodate every need of our customers during the design phase. Our planning, attention to detail, and excellent designs are evident in all our land development projects and hence these have become prime properties in Pakistan. Fueled by an intense eagerness to innovate, deliver value and build trust, the expanding business footprint has spread across many major Pakistan cities. The unwavering focus has always been to attain complete client satisfaction resulting in successful deliveries that are now recognized as the hallmark of New Age Developers (Pvt) Ltd. 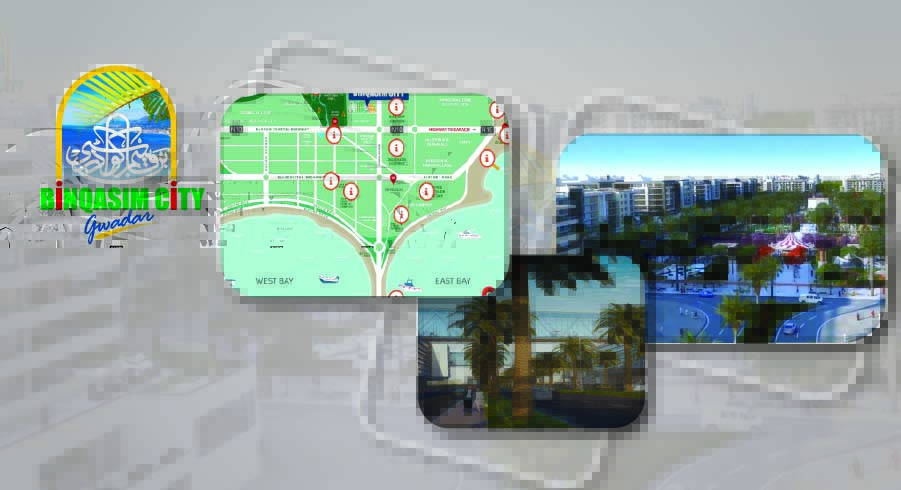 China-Pakistan Economic Corridor (CPEC) is a massive bilateral project to improve infrastructure within Pakistan for better trade with China and further integrate the countries of the region. The Bin Qasim City project was launched on April 20, 2015, when Chinese President Xi Jinping and the then Pakistani Prime Minister Nawaz Sharif signed 51 agreements and Memorandums of Understanding valued at $46 billion. The goal of CPEC is to transform Pakistan’s economy by modernizing its road, rail, air, and energy transportation systems and connecting the Pakistani deep-sea ports of Gwadar and Karachi to China’s Xinjiang province and beyond by overland routes. This would reduce the time and cost of transporting goods and energy such as natural gas to China by circumventing the Straits of Malacca and the South China Sea. CPEC is part of the larger Belt and Road Initiative to improve connectivity, trade, communication, and cooperation between the countries of Eurasia announced by China in 2013.

The work of Newage Developers is in full bloom on the CPEC, and some projects are already complete while others are near completion. The pace and progress on these projects are satisfactory, and work is continuing steadily. It will effectively promote the economic and social development of Pakistan and other countries in the region. Newage Developers, with its full command and potential, is executing in Gwader on different projects related to CPEC.

Newage Developers talks about CPEC Social Sector Development Projects. The Group finds its positive impact in many areas running under the umbrella of CPEC. Under CPEC, an effort will be made to promote people-to-people contact and enhance economic activities enormously.

The major social sector development project is a transfer of knowledge in different sectors. Under this initiative, experts from both sides will exchange expertise in industrial, rural, and urban development, job creation & SMEs, water resources management and treatment, and agriculture uplift.

Newage Developers is known as the name of the digitalized system. Planning Commission of Pakistan expects 27 SEZs to be set up across the country under CPEC by introducing Gwadar SEZ as the first model based on an area of 3000 acres on special discretion of China. The corridor will bring rapid industrialization, new techniques, technology, and greater investment to Pakistan.

The industrial and technological revolution would create several opportunities in the country and introduce and equip the youth with new techniques’ advancements in these sectors, enabling them to grab these opportunities. These changes will bring both social and economic advantages to Pakistan. One of the major social impacts of the China-Pakistan Economic Corridor (CPEC) is the flourishing of the tourism industry. Tourism within the country is expected to boom in the years ahead, making it a beautiful hub for tourism and hotel business investment. As one of the leading investors, Newage Developers has decided to escalate its volume of investment in the hotel industry. Property sales and purchases are on their boom since the initiation of the gigantic project of CPEC. Newage Developers has offered Bin Qasim City Gwadar housing projects its pride. By the grace of Almighty, the projects of Paradise Group have been an apple of the client’s eyes since its Inauguration.

The Azad Jammu and Kashmir (AJK) government plans to build a tourism corridor in the valley to facilitate travelers coming to visit scenic spots. Around 190 km long tourism corridor will be constructed in the State. The estimated cost of this infrastructure project of Bin Qasim City is around Rs.22 billion. The AJK government is also taking concrete steps to upgrade the existing infrastructure in the territory under CPEC, which will also boost tourism in the region. Similarly, the region of Gilgit- Baltistan (GB) is considered paradise due to its sky-kissing mountains, lakes, valleys, and lush green surroundings. With CPEC’s realization, the number of visitors worldwide to Pakistan will enhance, thus helping our tourism sector generate revenue.

CPEC will also contribute to improving the standard of living. As a result of the increase in trade tourism and investment, Pakistan’s economy gets a boost, and the government is now spending more on public employment opportunities. People’s income and standard of living are likely to increase.

Over the years, Pakistan is a hospitable nation, and its culture is convivial to accommodate other cultures. The inflow of Chinese people can create harmony among cultures. With the completion of CPEC, Pakistan will avail itself of great opportunities from Chinese experts in various sectors like education, health, and energy. The CPEC would also do the groundwork for further association among higher education institutions and enable intellectual exchange between the two people.

CPEC will also help reduce travel costs and travel distance that cause a decrease in illegal trade. Today, Pakistan is facing terrorism and militancy, and CPEC will help the government counter it. Prosperity and development discourage forces of obscurity and extremism. Another fruit of CPEC is that it will help gain internal stability because it will provide maximum opportunity to all provinces to get benefits. Pakistan’s gem and jewelry sector will also boost because of the CPEC, as Peshawar is the hub and the only direct market for all gems and precious stones found both in Pakistan and Afghanistan. Also, China is the biggest exporter of both gems and jewelry, so CPEC will help us improve our imports and exports in the gems sector, make innovations, and introduce new techniques by sharing with China.

Each area of Pakistan is blessed with natural resources. However, there is a huge gap between the potential and actual production.

For Newage Developers, China-Pakistan Economic Corridor is a win-win strategy. The investment and construction of energy and infrastructure Bin Qasim City projects under CPEC will contribute to Pakistan and China’s social, economic, cultural, and mineral resources. Newage Developers believes CPEC a long-term project, and the impact will stay for a long, long period.