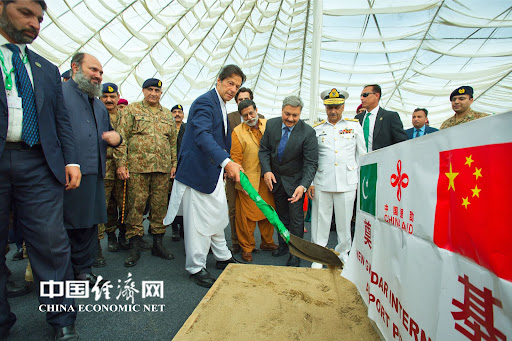 The CPEC, connecting Gwadar Port in the Baluchistan region of Pakistan to the Chinese province of Xinjiang, was the Chinese flagship initiative Belt and Road Initiative, worth several million dollars (BRI). It will expose the Arab Sea to China.

He also saw the signing of many Memoranda of Understanding with China aimed at creating a new hospital, an international airport, and a professional institute and tackling Gwadar water and electricity issues.

Following the efforts of the administration to focus on the province, it also received an informed report on the progress of the development package in South Baluchistan.

Khan claimed Pakistan was on track to become a ‘great country’ in his address.

“Pakistan’s future I dream, and with Pakistan I was growing up. It is to become a wonderful country.”

For two reasons: to open Phase 2 Gwadar Free Zone and Baluchistan development, Khan said he had come to visit Gwadar. “Gwadar becomes an interesting hub for Pakistan and especially Baluchistan with Pakistan at its centre.” he added.

He claimed it would connect the city with the globe and help promote trade, building Gwadar International Airport in China.

He stated that under the CPEC, Chinese investors want to set up enterprises to assist Pakistan in increasing exports.

He added that Pakistan was always at the mercy of the International Monetary Fund, “Unfortunately we never concentrated on exports, and that will help us bring in cash” (IMF).

“We pledge to promote the economic growth agenda of Pakistan,” he added.

He said Beijing is giving significant geopolitical and geo-economic assistance to Islamabad. The lofty 2,200 acres North Gwadar Free Zone 2 project to establish a center of the industry was one of the projects launched. According to Federal Planning Minister Asad Umar, the area was far more extensive than the 60-acre phase 1 and will accelerate Pakistan’s industrialization.

“This indicates the rising interest in the free Gwadar region between Chinese and global investors.” he tweeted,

Since 2013 CPEC has been a collection of infrastructure and other projects under development in Pakistan. Projects were initially estimated to be $46 billion, valued at $62 billion in 2017.